Worcestershire was at the heart of some of the earliest discoveries about our geological past in the 19th century.  As earth’s deep history and the evolution of species began to be debated and slowly accepted, researchers within Worcestershire started to investigate the particular history and geology of this region.

Some of the first to do so were Hugh and Catherine Strickland. During the mid-19th century, they discovered the remains of ancient animals, including mammoth, hippopotamus and elephant, around the River Avon and further afield. Inspired in part by the Stricklands, leading geologist Rev. William Symonds conducted fossil-hunting expeditions along the River Severn, wrote a guide for young naturalists and set up Malvern Naturalists’ Field Club and the Woolhope Club of Herefordshire.

William Smith (1769 – 1839) was a mineral surveyor and geologist. During the course of his early work in Somerset coal mines he noticed that rock layers were always laid down in a predictable pattern, and that these layers could be found in the same pattern across great distances.  He also noticed that the same fossils occurred in particular layers, and this helped to formulate his understanding of geology.

His geological map of England, Wales and part of Scotland, produced in 1815, was the result of these years of work as a mineral surveyor. The map presented both the results of his widespread surveying and also his theory on stratigraphy: non-contiguous regions of Britain could have their strata matched through identification of similar fossil assemblages embedded in the rock. These contributions convincingly suggest that he deserves the title of ‘The Father of English Geology’.

Smith’s map depicted the solid geology, not the later superficial deposits, i.e. the gravels and alluvia (water laid deposits) created and re-created through the last 2.6 million years.  The Geological Survey of Great Britain and Ireland was formed in 1835 (now the British Geological Society or BGS) and it began the task of fully mapping and understanding British geology.  Whilst there is now a huge body of evidence nationally, there are still many questions to be answered about the formation and make-up of our superficial geology, particularly in Worcestershire as it has been less well studied. 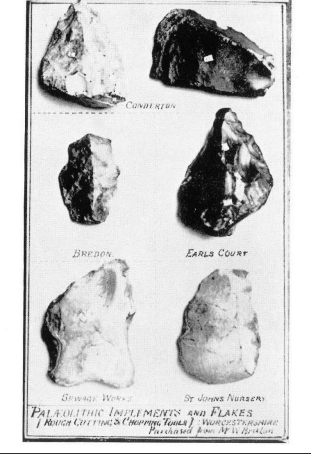 Despite earlier discoveries of ancient animals, by the Stricklands and others, it was not until the early 20th century that the first traces of Ice Age humans in Worcestershire were identified. In January 1915, news of the first Palaeolithic (Old Stone Age) artefacts discovered in Worcestershire was announced in a lecture by W. H. Edwards.

They were found  not by professors or learned gentlemen, but by a tailor from St Johns, Worcester called William Bruton. Many of his finds were made close to his home in St Johns, in the soils of the extensive plant nurseries. Others came from further afield:  Bruton recognised the significance of Bredon Hill to early humans and made a number of discoveries around Conderton.

W. H. Edwards was the curator of Worcester Museum in the early years of the 20th century, before moving to Birmingham Museum. Edwards recognised the significance of Bruton’s collection of prehistoric stone tools. He acquired many of them, and carefully arranged and labelled each one.

Artefacts from Worcestershire were featured in an influential 1922 paper by Reginald Smith. They caused great excitement. Up until then, it had been thought that Palaeolithic artefacts were only to be found in deposits to the southeast of a line running from the Bristol Channel to the Wash. Smith included a handaxe found at Henwick Pit, close to the eastern entrance to the University of Worcester’s St Johns campus.

Alongside Bruton’s discoveries, we owe a lot to the work of Dr Mabel Tomlinson for deciphering the Ice Age gravel terraces of the River Avon in Warwickshire and South Worcestershire. After a first degree in Combined Arts, Tomlinson went on to gain a second degree, in Geology, and followed this with a master’s degree, doctorate and higher doctorate. She carried out her research in the 1920s and 30s, setting out from Birmingham to tour the Vale of Evesham on her bicycle, mapping the landscape as she went.

Tomlinson also published the discovery of some impressive mammoth and woolly rhinoceros remains within the Vale of Evesham. In her clear, concise style, accompanied by beautiful illustrations, she revolutionised our understanding of this region.

All of this was undertaken alongside her teaching career. ‘Doc Tom’, as she known to her pupils, was an inspirational teacher. She taught at Yardley Grammar School for 42 years from 1917. Her influence was profound: she taught a generation of geologists who have gone on to become leading figures in their field.

Throughout the latter half of the 20th century, our understanding of geology and human evolution has improved dramatically.  New techniques, such as DNA sequencing and Optical Thermoluminesence Dating (a method to date when rocks were last exposed to sunlight) has allowed for a greater general understanding of our past than was ever thought possible 100 years ago.

Since 2003, a series of research projects have consolidated and furthered our understanding of Worcestershire’s early prehistoric past. These were followed by a programme of exhibitions, events and an art installation to share the fascinating stories of our origins with the public. Details of recent work can be found via the Project pages.